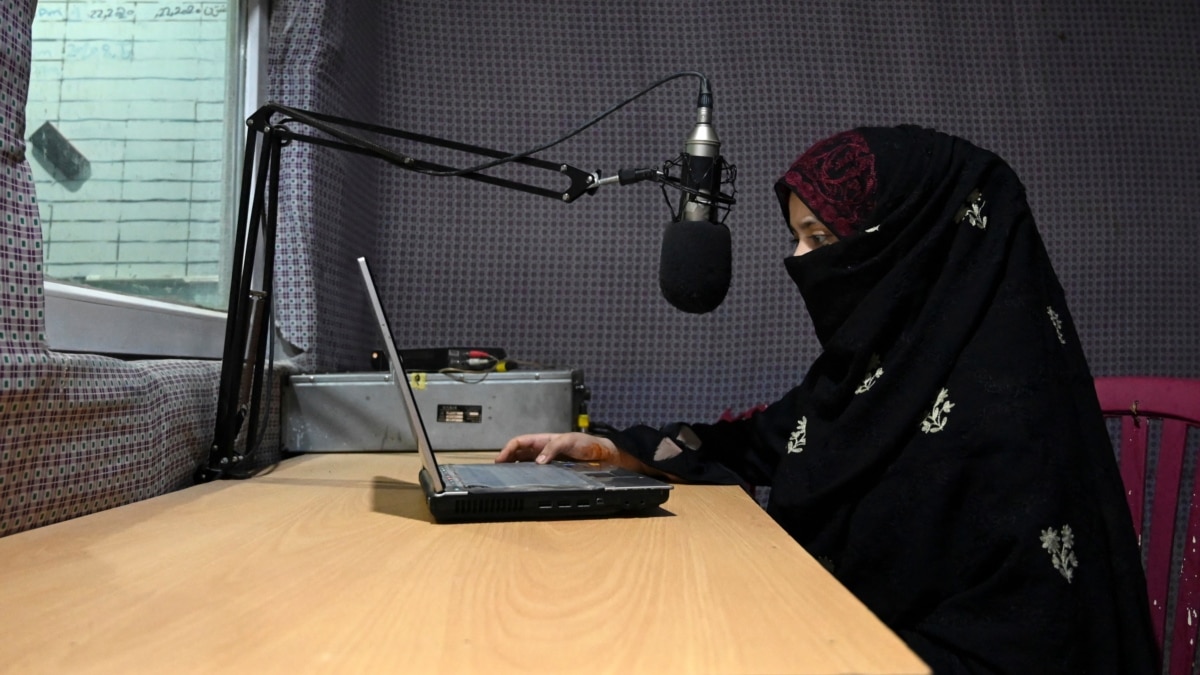 Mina Akbari had a busy schedule, presented two daily shows for Shamshad TV in Kabul, and prepared content on women’s issues for Nargis, a radio station in Nangarhar province in eastern Afghanistan.

But since the Taliban captured Kabul on August 15, Akbari has been at home, too scared to return to work.

Nargis, the station where she worked, is one of at least three female-owned or operated broadcasters that have changed their staff or programming out of fear that the Taliban could retaliate against them. One has temporarily suspended its operations.

Although none received direct orders from the Taliban, under the group’s old rule, women were not allowed to work or occupy prominent roles. And since he took power, girls ages 12 to 18 have been told to stay home.

The Taliban’s acting deputy minister for information and culture, Zabihullah Mujahid, told VOA last month that women would be allowed to return when they are safe.

“It is up to Islamic scholars to decide the rules for women and to teach them how to work or continue their education,” Mujahid said, adding that the Taliban were waiting for scholars to inform the government of their decision.

The Taliban also said private media would be allowed to operate freely, as long as they did not go against Islam. But the group released media guidelines and rights groups cited an increase in violence and threats by members of the Taliban in the past two months.

Some reporters at state-run stations also said they were not allowed to work. Shabnam Dawran, presenter of the state-run Radio Television Afghanistan (RTA), publicly explained how members of the Taliban prevented her from going to work.

“The Taliban told me to go home. The regime has changed,” Dawran told VOA Deewa.

Dawran said she was dressed in a hijab and presented her work ID card, but was not allowed to take office. Male colleagues, however, were allowed to enter the station’s offices.

“I had only seen the Taliban in photos, in the media, in the news, but I never imagined that one day I would stand up to them and argue with them,” Dawran said. â€œWhile I was arguing, a Talib came forward, pointed his gun at my head and said, ‘It’s just a question of the bullet.’ But I answered no matter what, a hundred women like me were killed and I will be the 101st. ”

Khadija Amin, who works for the same channel, says she was also sent home.

â€œThe Taliban would never want women to work. If the Taliban had no problem with women working, why didn’t they have a single female representative in the peace process? Amine asked.

Suhail Shaheen, spokesperson for the Taliban political bureau in Qatar, did not respond to VOA’s requests for comment.

For the journalist from Nargis Akbari, the memory of the threats before the Taliban officially took power adds to her decision not to work.

â€œI have been threatened by the Taliban on several occasions for not wearing a headscarf on TV shows, for talking about women’s rights or for reporting facts about the Taliban. They even accused me of being against it. Islam and being an infidel, â€Akbari said. . “Several times for a short time I had to move to neighboring countries, then I came back to continue my work.”

Several staff at the female-run station went into hiding. Some have even left the country.

Shafiqullah Rahmani, station manager for Nargis, said many women-led organizations have been affected by the Taliban takeover.

â€œOur female colleagues are always afraid. Each of these women has worked in journalism for over 10 years. We are in contact with them and they want to return to work but are waiting for the Taliban leadership to announce that they are allowed to go to work, â€said Rahmani.

It’s a similar story to Naz, a local station in Khost province that broadcasts programs on education, health, awareness.

The station was run by about 15 women, but after the capture of Afghanistan by the Taliban, none of these women returned. Instead, they were replaced by male colleagues.

â€œThe Taliban didn’t tell us anything about women’s work on our radio, but the women thought if the Taliban didn’t allow girls to [to go] at school, that means they are not allowed to work either, â€he said.

In western Kandahar province, the local Merman station – which means “woman” in Pashto – has temporarily closed. Her team of presenters broadcast 14 hours a day.

The station received the Reporters Without Borders Impact Award in December 2020 for its work in promoting women’s issues and training.

Ruhullah Sherzad, the station manager, told VOA Deewa: â€œWe have temporarily shut down the radio. We have not yet been insured.

When asked if reporters could continue if they broadcast from home, Sherzad replied that it would be difficult.

“We may not be able to provide all the technical support at home to our workers. We have economic problems,” he said. â€œThere are so many problems in Kandahar with electricity and the Internet. We cannot provide computers, microphones, and any other equipment for these women at home. It will be expensive.

For radio journalist Akbari, the past two months have been difficult. â€œMy heart is shattering to pieces because I don’t have a job to do. I miss my colleagues and my workplace,â€ she said.

This story was born in VOA’s Deewa service. Munaza Shaheed is a reporter and news anchor for VOA’s Deewa service in Washington, DC Shaheed focuses on politics, economics, and women’s and human rights issues in Afghanistan and Pakistan.

Find your favorite radio stations on the GhanaWeb TV page