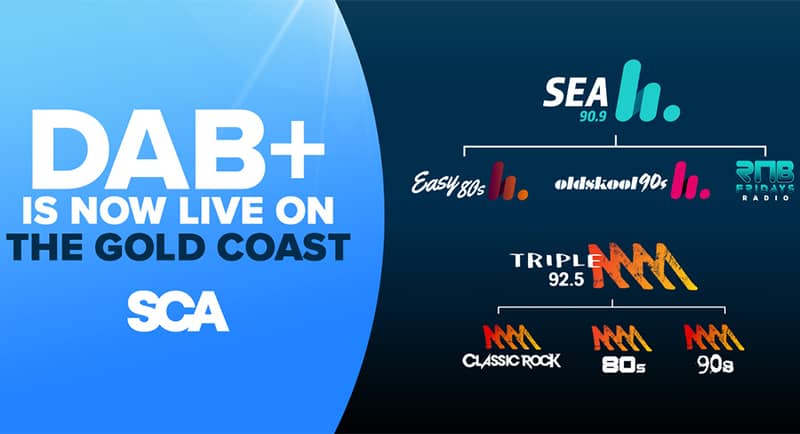 SCA has announced the launch of eight DAB+ (Digital Audio Broadcasting) digital radio stations from the Hit and Triple M networks on the Gold Coast.

The Gold Coast will be the 10th city in Australia to have DAB+, which provides a more spectrum efficient technology than AM and FM and offers better audio and text information for its programmes.

On the Hit Network, the Gold Coast can now hear 90.9 Sea FM with a breakfast show, Bianca, Dan and Benthe easy hits of the 80s and the Dannii Minogue hosted station, Oldskool 90 Hits, as well as new LiSTNR station, RnB FRIDAYS Radio, which includes a breakfast show, Mike E and Emma 7 a.m. to 10 a.m. on weekdays.

Combined with its LiSTNR, SoundCloud, Triple M and Hit networks, SCA has 11 DAB+ stations in its stable, reaching over 955,000 people each week, and continues to grow its digital radio audience, doubling its audience since 2017.

SCA’s Chief Music Officer and Provincial Group Content Director, Mickey Mahersaid: “We are delighted to share our Hit and Triple M DAB+ stations with audiences on the Gold Coast, and know they will love the new variety and quality content we are offering.

“Our Hit and Triple M DAB+ stations now offer the Gold Coast a wide range of musical genres to suit a wide range of tastes and let’s not forget the caliber of hosts including Dannii Minogue, Ella Hooper and Mike E & Emma .”

Gold Coast’s DAB+ digital radio stations are accessible from 4 April on DAB+ and available via LiSTNR.