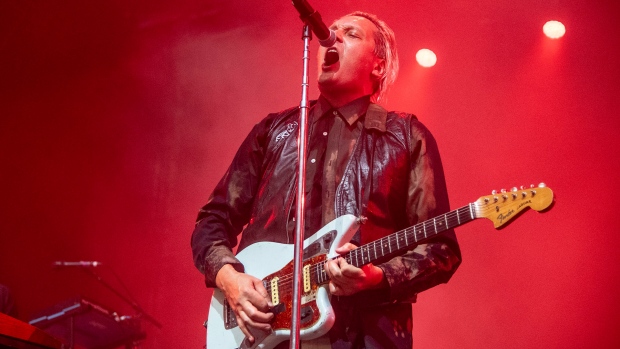 TORONTO – Arcade Fire has been pulled from some Canadian radio stations due to allegations of sexual misconduct against singer Win Butler.

A CBC representative said the broadcaster will “suspend” the Montreal rock band’s airing on its CBC Music FM radio station and on Sirius XM CBC Radio 3, “until we learn more about the situation.” .

Meanwhile, Ian March, program director at Toronto’s Indie88, confirmed the indie rock station made “a quick decision over the weekend to pull the band’s music”.

He says that Indie88 “has not yet had an in-depth internal conversation about the permanence of this decision”.

On Saturday, music publication Pitchfork published an article containing allegations of inappropriate sexual interactions against four people by the 42-year-old musician. The Canadian Press could not independently verify the accounts described in the report.

The plaintiffs told Pitchfork that the alleged interactions were inappropriate due to age gaps and the power dynamics at play and included unwelcome advances.

One of the accusers said Butler sexually assaulted them twice in 2015, when they were 21 and he was 34.

The first incident of forced touching occurred when Butler allegedly stuck his hands in their pants without consent while they were riding in a car together, according to Pitchfork. Another time he reportedly showed up at their apartment when told not to come, according to the report.

Pitchfork also spoke with two women who say Butler asked them for sexually explicit photos or videos, while another woman says he sent her unsolicited sexual text messages and photos.

In a statement emailed through a crisis PR firm, Butler admitted he had sex outside of his marriage with bandmate Regine Chassagne.

But the singer denies any allegations of misconduct, saying all encounters were between consenting adults and he never touched a woman against her will or demanded sexual favors.

“As I look to the future, I continue to learn from my mistakes and work hard to become a better person, someone my son can be proud of,” Butler said in the statement.

“I’m sorry for the pain I’ve caused – I’m sorry for not being more aware and in tune with the effect I have on people.”

Arcade Fire went ahead with the launch of their world tour on Tuesday in Dublin, Ireland, with fellow Canadian musician Leslie Feist booked as the band’s opener.

Photos of Feist’s merchandise table uploaded by viewers on social media showed a sign that proceeds from merchandise sales would be donated to Women’s Aid Dublin, an organization focused on tackling domestic violence.

The Feist manager did not respond to requests for comment on whether his decision was related to the allegations against Butler or part of a previously planned fundraising effort.

This report from The Canadian Press was first published on August 30, 2022.