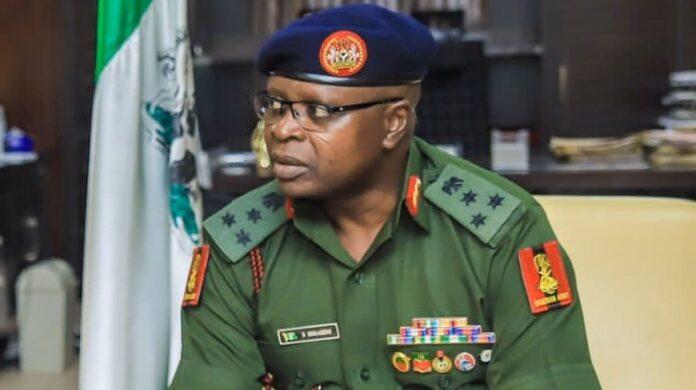 Former Head of State General Yakubu Gowon urged NYSC leadership to keep pace with its ongoing progress, which has kept the program in the national and global spotlight.

Gowon made the call Thursday in Abuja, during the inauguration of the National Youth Service Corps (NYSC) television and radio stations.

Gowon said the program has, over the nearly five decades of its existence, successfully harnessed the potential of young graduates as role models for defining patriotism, credible and quality leadership, and economic regeneration.

According to him, the media will undoubtedly help strengthen and sustain the programme’s ability to consolidate its achievements and reach its global audience.

He said “in particular, they will serve as real tools to drive our quest for national unity: cohesion and targeted development.

“I sincerely expect that Nigerians will not only find NYSC Radio and Television Stations as trusted platforms for dissemination of information, education and entertainment but also ensure regular patronage of their services.

“In doing so, we will demonstrate our collective resolve to bequeath a better nation to future generations of Nigerians,” he said.

Also read: 26 people die as a boat capsizes in Sokoto

Gowon said he was delighted that the corps members continued to render patriotic and selfless service to the country, especially as active participants in the implementation of national programs.

“Programs such as elections, immunization, population census, and advocacy programs on the Sustainable Development Goals (SDGs), NYSC’s health initiative for rural residents, and the HIV campaign /AIDS, among others.”

He added that he hoped the achievements would receive the widest publicity from stations in order to garner more support from the general public.

The former statesman appreciated that governments at all levels are prioritizing youth development issues and the NYSC in particular.

He called on all stakeholders to further support the program in its arduous task of promoting national unity, integration and development in line with its vision.

He also expressed his support for the proposed NYSC trust fund, adding that he was impressed with the progress made in the legislative processes towards the passage of the bill establishing the fund in the National Assembly.

The CEO of NYSC, Maj. Gen. Shuaibu Ibrahim, said the NYSC has continued to provide successive batches of corps members with the necessary platforms to make meaningful contributions to national development in various aspects of the nation.

He said the establishment of the stations is part of the activities to further advance the cause of the project, which symbolizes national unity.

“He is at the forefront of nurturing a generation of young entrepreneurs who are contributing to the nation’s gross domestic product through their exposure to NYSC training in skills acquisition and entrepreneurship development.

“The philosophy behind the establishment of these stations is multifaceted as they will educate and entertain, give the program a stronger voice to spread the programs and sensitize Nigerians on government policies.

“They will contribute to the promotion of national unity, the national ethos, as well as the reorientation of values.

“Thus, they will help shift the mindsets of Nigerians, especially the youth, towards noble things,” he said.

The chief executive promised that the stations would always abide by the code of conduct guiding the broadcasting industry in Nigeria.

According to him, the stations will be managed in a responsible, professional and efficient manner in order to maintain and deepen the philosophy underlying their establishment.

Ibrahim also said the station would be primarily run by corps members under the supervision of relevant NYSC staff members.

He added that they would also provide a way to train and hone the skills of successive groups of corps members interested in pursuing a career in the broadcasting industry.

Listing some of the achievements of the current leadership, Shuaibu said he released

nine books that highlight NYSC’s contributions to national unity and development from its inception through 2020.

“Others are the resuscitation of the weekly NYSC television and radio programs, the production of NYSC films, the creation of the NYSC Museum, the NYSC National Cultural Troupe, the North Central Skill Acquisition Center and the new NYSC Garment Factory, Bakery and Water Factory in Keffi, Nasarawa State,” he said.

He also said that there was an aggressive revenue generation campaign through NYSC Ventures and the NYSC Integrated Online System and enrollment of Corps members in the National Health Insurance Scheme had started successfully.

Mr. Eddy Megwa, Director of Press and Public Relations, said the stations will greatly increase the visibility of the program in the media space both locally and internationally and will also project and amplify the many achievements of the program.

In attendance were, among other dignitaries, the Managing Directors of Voice of Nigeria, Mr. Osita Okechukwu, Federal Radio Corporation of Nigeria, Mr. Mansur Liman and Mr. Garba Shehu, Senior Special Assistant to the President for Media and Publicity. (NOPE)