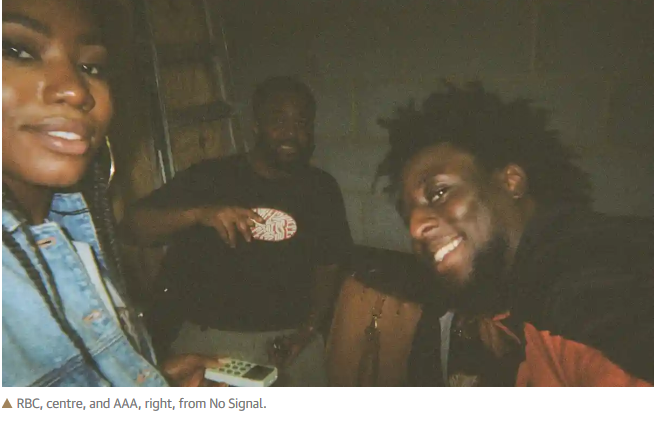 Guardian UK – Online station No Signal and its flagship show # NS10v10 have become a social media sensation – and are bringing black communities together during the coronavirus and protests.

“One of the most lyrical badman tunes of all time! Says dancehall DJ Levels, after Vybz Kartel’s Real Badman has just played. “It represents Jamaica – it represents real music! “

“I’m from Nigeria,” laughs rival manager Joie, who responds to Levels by playing No Lele by Nigerian Afrobeats star Wizkid. “Were the biggest.

It’s NS10v10, a tumultuous DJ battle that has become the flagship show of No signal, the UK online radio station that has been one of the few success stories amid the difficulties of the Covid-19 lockdown.

Calling themselves #blackradio, they play music from across the African diaspora that fits into the diverse spectrum of black British identity and creates a space of community and relief for black Britons at a traumatic but galvanizing historical moment.

Scenes in the DJ booth at a Recess event. Photography: RP

“Whether it’s R&B, soca, drill or dancehall,” says Joseph, also known as VI, who is responsible for programming at the station, “we wanted to represent the black diaspora as a whole. This is what we listen to at home or in clubs.

No Signal was originally conceived and then set aside by brothers Jojo and David Sonubi as an extension of Recess, their series of club nights and parties that have become the bedrock of black nightlife in London. When the lockdown interrupted their events, they restarted it. “I realized there would be so much free attention available,” says Jojo. “The weekend lockdown was announced, we were supposed to have a big recess party at [east London venue] Village Underground, so we launched a Livestream in its place and 300 people locked up.

Since then, a rotating roster of No Signal DJs, producers, playlists and programmers have been streaming radio shows from the station’s website, switching from one genre of black music to another, like a heptathlete changing disciplines. They broadcast everything from Saturday night dancehall parties and Ghanaian hiplife to Afro-jazz and 70s reggae, and introduced their station to listeners in 99 countries.

“We used the tools we could to the best of our ability,” says Anthony, also known as AAA, one of the station’s producers. “The Internet carried a radio stream with our bredrins to the other side of the world. We do it from our rooms and our houses with mum’s wifi, and now we play in places like Mauritius.

“Our culture is rich on every level,” adds Joseph, “All you see here is us, they are black people. Whether you are from here or elsewhere, we are all represented by the shows. from this chain We wanted people to feel at home here.

# NS10v10 has been the key to their success. The interactive music session is partly a sound shock – with roots in Jamaican sound system culture, where rival systems come and go with songs for crowd supremacy – and partly a game show, with the inspiration from lockdown Instagram shows such as Canadian rapper Tory Lanez’s Quarantine Radio.

The rules are simple: two rival contestants represent a predetermined artist, then face off over 10 rounds, facing song choices against each other. The winner is decided by the Twitter users, who declare the strongest track in each round. “I love watching football and Love Island, and the online commentary always adds another layer of fun,” says Jojo. “I thought to myself: how can we do this but with live audio? “

The show’s first season featured tracks from rappers Skepta and Giggs featured in a clash between British stars, an afro-swing showdown with J Hus and Kojo Funds, a ’90s rap show between Missy Elliot and Busta Rhymes, and an R&B reversal with Mariah Carey and Beyoncé. An ’80s vs’ 90s special edition between special hosts Ian Wright and Julie Adenuga saw the former England footballer use the platform to open up about the consequences of racism online.

With each clash that took place, the show spread across social media, with the hashtag # NS10v10 becoming an interactive dance floor, spanning “black Twitter” and into new corners of the internet. The clash between Wizkid and Vybz Kartel was the tipping point. Over 200,000 listeners listened that night, and since then, No Signal’s audience has grown exponentially.

But No Signal is more than a soundclash-slash-gameshow. With the end of the first season, the station expanded its programming. A slew of new interactive shows include Ask Oloni, a dying auntie show with sex blogger Dami “Oloni” Oloniskin, and Spot the Sample with writer Jesse Bernard, which explores samples linking some of the eras and songs. most emblematic of hip-hop.

Elsewhere, intermissions highlight causes worthy of listeners’ rallying: community platforms such as the BYP network connect black professionals with job opportunities and The Black Curriculum is an organization that teaches school students about black British history.

“It’s the right thing to do – we’re a resource for people,” says Jojo. “Social networks are drowning a lot and it is difficult to pay attention to certain things. But it is beneficial for everyone to know these great causes which must be put forward. By threading these larger elements into the station, No Signal displays the variety of the black British experience, welcoming the niche conversations and community-wide issues that in this country weave black identities as willow baskets.

As the lockdown draws to a close, thoughts have turned to No Signal in the new world that we will eventually inherit. They’ve partnered up with Spotify before, with every # NS10v10 clash being available to play on the streaming platform, and there are plans to further establish itself as a full-fledged radio station, taking over the radio mantle. specialized black left by the London-based station. Choice FM was absorbed by Capital.

“There has been a gap in the black culture market,” says Neil, also known as RBC, who broadcasts and produces on the station, as well as hosting a show. “There are radio stations that covered grime and alternative music, but the black community had Choice FM and we really miss it.”

Until then, they continue with a programmed program bringing together the many faces of black music and reviving the spirit of black club nights closed by the quarantine. In the midst of isolation, they have become more than a radio: a gathering for those seeking community in times of solitude.

The second season of # NS10v10, meanwhile, is underway and Twitter timelines are turning into dance floors once again. In the Boy Bands vs. Girl Bands clash, full of ’90s flashbacks and home party gems, head coach Nicksy pokes fun at her rival. “They are connoisseurs, they are uncles, they are OGs in the game!” she laughs as Premier Gaou of the Ivorian group Magic System fades: “African hall party classic!