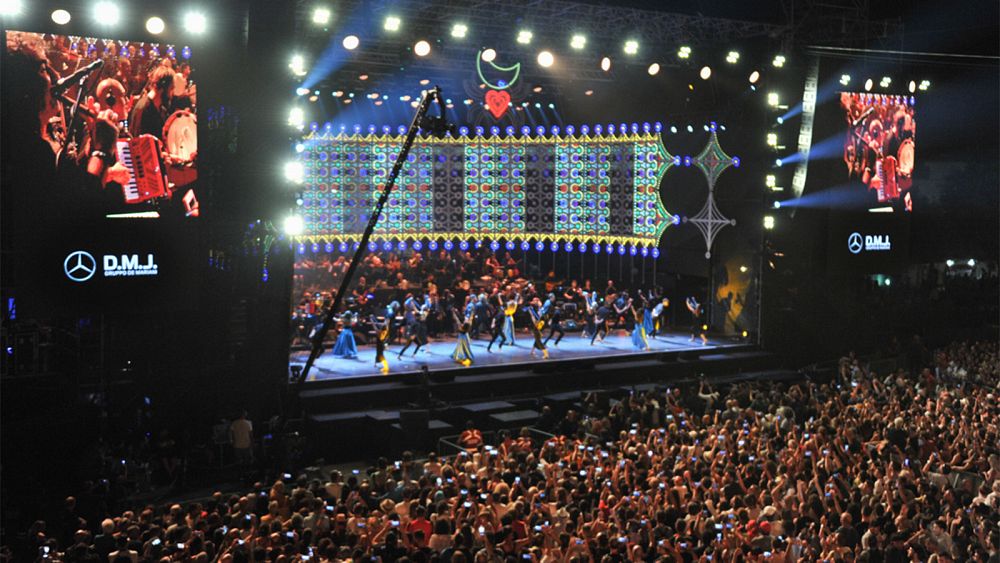 Materadio puts the radio on stage

As part of its ongoing celebrations as the European Capital of Culture, the Italian city of Matera will host three days of live programming from state radio station Rai Radio 3 from September 11-15.

For its ninth year, Materadio will take place not only in the evocative squares of the city center, but also in a new venue in the form of Cava del Sole – an imposing quarry at the entrance to Matera, carved out of tuff limestone. .

In this unique setting, the channel’s presenters will feature special guests, speakers and musicians for a series of events broadcast live across the country.

Gathered under the theme “The South”, the events will explore the traditions, beliefs and changing landscapes of a conceptual south, transcending geographic boundaries and following the routes that unite and transport people.

Activist and trade unionist Aboubakar Soumahoro – one of the many special guests present at the events – will meet with writer and activist Goffredo Fofi, examining how the Mediterranean region has become a place of uncertainty, where refugees see themselves too often deny the shelter they need.

This theme is explored further in ‘629. Men in Cages’, a theatrical project that tells the story of the 629 people on board the ship Aquarius who were denied asylum in June 2018.

During a concert organized in the unusual setting of the Essenza Lucano museum, showcase of the region’s famous Amaro Lucano liqueur, singer-songwriter Teresa de Sio is preparing to evoke the sounds of the south in a concert entitled ” Reason and Feeling â€.

Other highlights of the music include the ‘Concerto Italiano’, an hour of early music for flute, violin, cello and harpsichord, and two ‘Music Lessons’, which examine the dialogue created between musicians, as they inspire and inspire each other through the ages. The first features music by Mozart and Haydn; the second the music of Beethoven and Brahms.

Within the framework of the cultural series of Radio 3 entitled â€œFilo Rossoâ€ (red thread), the history of the southern regions of Italy is told, during these three days, through eight traditional objects, ranging from maritime objects that have shaped the very history of the Mediterranean to nets, compass, coral and amphorae – to everyday objects such as lamps and candles.

I pupi (“Les Marionnettes”) will examine the history of these curious puppets, almost life-size, which are part of a long tradition of storytelling in the theater. The use of pupi in the narrative of medieval knightly tales gained popularity in the early 19th century, and remains popular to this day. In 2008, they were recognized on the UNESCO list of intangible cultural heritage.

Historians Alessandro Vanoli and Amedeo Feniello will be accompanied by guitarist Carlo Mascilli Migliorini in this journey through the stories of eight objects from the south, ending with The ValigiÃ© (‘The suitcases’). Going far beyond the physical aspects of the journey, speakers will talk about the lives and dreams that migrants and refugees have taken with them over the centuries in their quest for a new and better future.

Other events to watch out for include a live broadcast of â€œHollywood Partyâ€, a regular show on Rai Radio 3 in which pundits and guests talk about movies and the latest releases. Any discussion of films has a special resonance for Matera, whose turn of fortune is due in part to the sudden interest in the city as a filming location.

Many of the city’s most breathtaking buildings are carved into the rock that forms the side of a deep ravine, and until just a few decades ago, most of Matera’s inhabitants lived in cave dwellings, preserved and even renovated nowadays. This made the city a perfect replacement for former settlements such as Jerusalem (she mostly starred in the Mel Gibson film The passion of Christ).

More recently, however, Matera was the location of the last Bond film, No time to die (to be released in 2020), and 007 in its various incarnations, from 1953 to the present day, is the theme of this special edition of Hollywood Party.

Faithful to the theme of the rapprochement of cultures, various concerts featuring international musicians will take place as part of the Materadio program. A highlight promises to be the performance of Norwegian jazz saxophonist Jan Garbarek, who will be joined on stage by another world-class musician, Indian percussionist Trilok Gurtu.

Bridges are also being built between Matera and comparable cities around the world. â€œMatera and Bamiyan, Twins in Historyâ€ compares the fortunes of two towns which have experienced hardship and whose fortunes were subsequently reversed. Bamiyan in Afghanistan saw its two giant 1,500-year-old Buddha statues destroyed by the Taliban in 2001, but saw its archaeological park come to life in the same way the Sassi cave dwellings of Matera shook their roots. in poverty to become attractions in themselves.

Homage is paid to the Italian personalities of the astronaut Samantha Cristoforetti, to the author Andrea Camilleri and to the cyclist Fausto Coppi, and to traditions such as the “pizzica” – a local folk dance, one night of which will be performed by the orchestra La Notte della Taranta in Cava del Sole.

The program concludes on Sunday September 15 with a ‘Gran Finale’ lunch in Piazza San Francesco, during which Italian folk group Modena City Ramblers hand over the metaphorical torch of European Capital of Culture to Galway, Ireland, which will hold the title in 2020. Known for their Celtic influences, the Ramblers will be joined on stage by Irish folk musicians GearÃ³id Ã“ MurchÃº, Ruairi Liam Mac Con Iomaire and Rebecca NÃ­ Ã‰allaithe, fresh out of their performances at Traidphicnic, the main traditional music festival Irish Galway.

These are just a few of the latest elements in a year-long exhibition, performance and conference program that is expected to attract over 1 million visitors to the city over the 12 months.

The best way to enjoy all that the city has to offer this year is with the Matera Passport 2019. For â‚¬ 19 you can not only access the events of the year for free, but also enjoy unlimited public transport. If you are only in Matera for a short time, a day passport is available for â‚¬ 10.

Save me | Where to watch and stream online