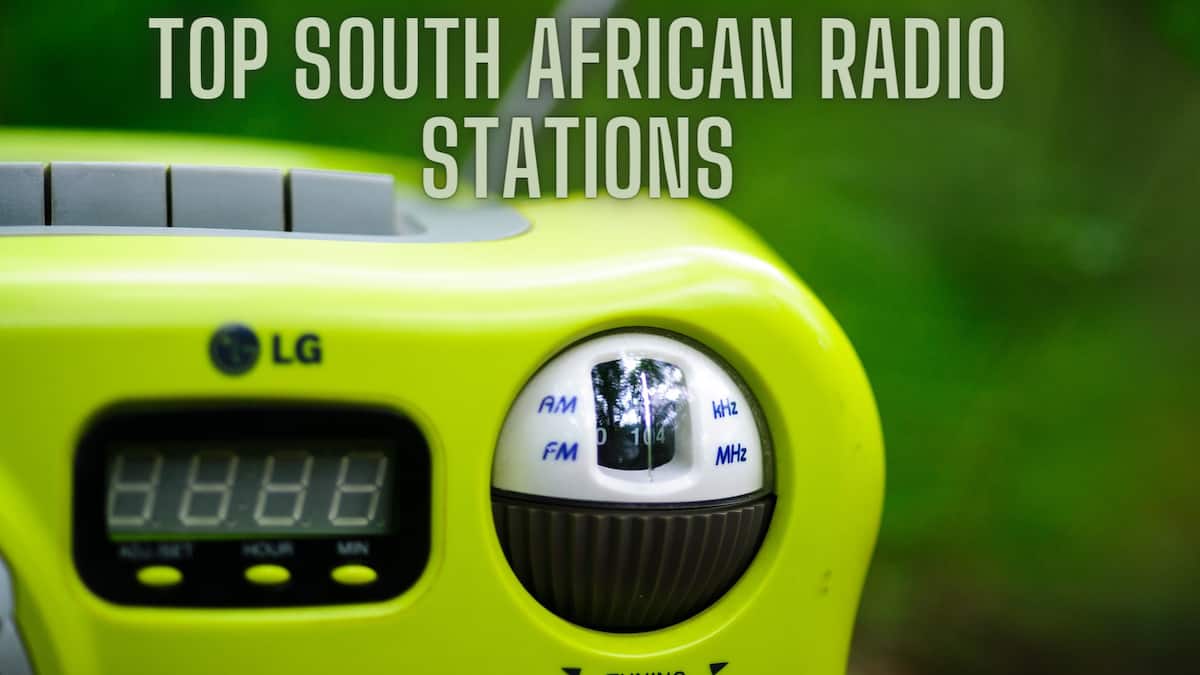 List of top 20 South African radio stations and their frequencies

Despite technological advancements in South Africa, radio remains an important part of the country’s consumption. Mzansi has several stations that meet the needs of different audiences. Which networks are most preferred by listeners in 2021? Below is a list of top 20 SA radio stations.

Published data by the Broadcast Research Council of South Africa for the period January to June 2021 reveals that 74% of radio listeners listen to music, 70% to news and 39% to traffic news. Traditional radio frequencies remain a popular means of accessing stations at 77%, mobile access at 29%, television at 12% and computer at 1%.

New laws could change the fact that TV licenses are unpaid

The list comes from South African Broadcasting Research Council (BRC) for data collected and analyzed between April 2019 and March 2020.

Ukhozi FM is the country’s largest radio network and has long held the number one spot with over 7.6 million listeners. Statistics from April 2019 to March 2020 show that 7,607,000 people have connected to the network. It is owned by the SABC and targets the Zulu speaking community in the country. The Ukhozi FM frequency is 91.5 MHz in Johannesburg.

Umhlobo Wenene FM is a SABC-owned public broadcasting service radio station targeting the isiXhosa community. It is the second most preferred network in South Africa, with over 5.8 million listeners according to BRC statistics from April 2019 to March 2020. UWFM is available in 7 South African provinces except Limpopo and Mpumalanga, at frequencies between 88 and 106.8 MHz.

Metro FM is an urban radio station owned by SABC and targets young people in SA. It occupies 3rd position with more than 4.3 million viewers according to BRC statistics from April 2019 to March 2020. Metro FM frequencies are as follows;

Lesedi FM is a SABC-owned PBS radio network targeting the Sesotho community. It comes in at number 4 as Mzansi’s preferred network with over 3.3 million listeners. The Lesedi FM frequency varies between 87.7 and 106.6 MHz across the country.

Thobela FM is a PBS / Commercial network owned by SABC. It targets the speaking and understanding audience of North Sotho SA and has over 2.9 million listeners according to statistics as of March 2020. Thobela’s FM frequencies range from 87.6 to 92.1 MHz, and the exact frequency can be looked up on its website’s frequency finder. Its imprint is in Limpopo, Gauteng, Mpumalanga and the North-West.

Who will win Idols SA 2020? Your votes will determine the winner

Motsweding FM is a contemporary adult urban radio station owned by the SABC and broadcasts in Setswana. The network occupies sixth position on South Africa’s 10 best radio stations list, with an audience of over 2.7 million listeners as of March 2020. Motsweding’s FM frequencies range from 87.9 to 107 , 9 MHz in the northwest, Northern Cape, Gauteng province, Free State, parts of Limpopo and Mpumalanga.

RSG is an Afrikaans radio station owned by SABC. The PBS network had an average audience of over 1.3 million listeners as of March 2020, as revealed by BRC statistics. Radio Sonder Grense frequencies vary between 100 and 104 MHz and have national coverage.

Munghana Lonene FM broadcasts in Xitsonga language and is also owned by SABC. It is one of South Africa’s favorite radio stations with over 1.2 million listeners. Its frequencies are 103.2 MHz in Johannesburg and 95.6 MHz in Pretoria. Munghana Lonene FM has footprints in Gauteng, Limpopo, North West and Mpumalanga, as well as in Mozambique and Zimbabwe.

Who owns the SABC News network? SABC lost revenue and news presenters are on strike

Gagasi FM is an urban radio network based in Durban. Its programs are split between conversation and music and are taught in Zulu and English. It is one of South Africa’s most popular networks, with over 1.1 million listeners. The frequency of Gagasi FM is 99.5 MHz and broadcasts throughout KwaZulu-Natal.

Jacaranda FM ends the list of top 10 FM radio stations in South Africa with an audience of over 1.1 million listeners. It is owned by Kagiso Media and broadcasts in English and Afrikaans. Jacaranda FM’s frequency varies between 93.9 and 97.1 MHz and broadcasts in Gauteng, Limpopo, Mpumalanga and the northwest.

East Coast Radio is a commercial network based in KwaZulu-Natal. Regional radio is one of the largest, with an average audience of over 1.02 million. ERC can be found on 94.0 FM in Durban, and covers the entire KwaZulu-Natal.s range between 90.6 and 107.7 MHz, and it has footprints in the following areas;

Ligwagwala FM is a PBS network owned by SABC with SiSwati programs. An average of 1.09 million people listen to the station, according to BRC statistics from April 2019 to March 2020. Ligwalagwala FM broadcasts on 87.7-104.0 MHz and covers Mpumalanga, Limpopo, Northwest , KwaZulu-Natal and parts of Gauteng.

East Coast Radio is a commercial network based in KwaZulu-Natal. Regional radio is one of the largest, with an average audience of over 1.02 million. ERC can be found on 94.0 FM in Durban, and it covers all of KwaZulu-Natal.

KFM is a Cape Town based network owned by Primedia Broadcasting. It has an average audience of 943,000 and can be viewed on 94.5 MHz in Cape Town.

Highest-paid TikTok stars in the world 2020

947 is based in Johannesburg and is also owned by Primedia Broadcasting. It comes in at number 15 on SA’s best radio stations list, with an audience of around 899,000. You can find the network on 94.7 MHz in Johannesburg.

Phalaphala FM is a SABC-owned radio station that targets audiences who speak and understand Venda. It has an average audience of 804,000 based on BRC statistics from April 2019 to March 2020. Phalaphala’s FM frequency is 107.8 MHz in Johannesburg and 100.1 MHz in Pretoria.

Kaya FM 95.9 is a Johannesburg-based commercial radio station. The network averages 777,000 listeners and broadcasts on 95.9 MHz in Johannesburg, Gauteng.

Radio 2000 is a Johannesburg-based network owned by SABC and generally broadcasts sports activities live. The national station has around 751,000 listeners and its frequencies vary between 97.2 and 100 MHz across the country. Listeners can use the frequency finder on the Radio 2000 website to get the exact frequency for their area.

Heart 104.9 FM, also known as Cape Town’s Beat, is a Cape Town-based music station that broadcasts jazz, urban and contemporary genres for adults. Its average audience is around 746,000, according to BRC statistics. You can find your location’s frequency from its website’s frequency finder.

YFM is a Johannesburg-based youth radio station that mainly broadcasts urban music with limited talk shows. BRC statistics show that the network has an average of 638,000 listeners.

Which of your favorite radio stations in South Africa is on the list? As the above list of top 20 SA radio stations reveals, networks owned by SABC dominate.

Briefly.co.za featured the 30 Most Exciting Reality TV Shows You Should Consider Watching. Streaming sites offer many such shows to keep you entertained.

Reality TV shows are known to provide viewers with raw, unedited content. They quickly gain fame due to their thrilling comedy and drama. Check out the article to find out which ones to add to your must-have list.

Singer Harmonize to launch his own TV and radio stations