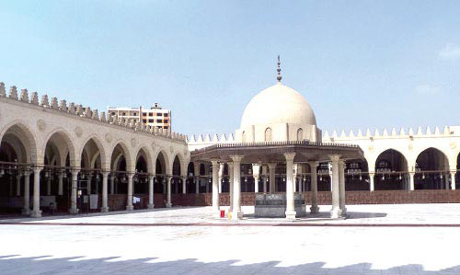 Egypt’s Ministry of Religious Endowments has announced that it will start radio broadcasting evening prayers and Tarawih communal prayers from Cairo’s famous Amr Ibn Al-‘As Mosque on Sunday, according to a ministry statement.

In a statement released on Saturday, the ministry said only the mosque’s imam and two mosque employees would attend the prayers, which would be broadcast on Al-Quran Al-Kareem radio station.

Egypt has banned common prayers in mosques and churches due to the coronavirus outbreak, and prayers at the Amr Ibn Al-‘As Mosque will not be broadcast via an external loudspeaker to avoid gatherings at the exterior of the mosque.

The Amr Ibn Al-‘As Mosque was the first mosque built in Egypt and in all of Africa.

Egypt is experiencing an unprecedented Ramadan this year as restrictions aimed at containing the pandemic, including an extended nighttime curfew in place since March, continue to weigh on the cherished rituals of Islam’s holiest month.

The government has banned all public religious gatherings during Ramadan, including public iftars – fast-breaking meals – and communal taraweeh prayers.

The ban also includes the itikaf ritual in which believers isolate themselves in mosques for an extended period.

Carvoeiro gets its own online radio station

The Best Online Radio Websites You Need to Check Out